The most requested feature on Monica (since the last one) was the ability to designate an existing contact as a significant other or a child. With 0.6.3, this is now possible.

How does it work

When you add a significant other or a kid, you now have access to two new things: 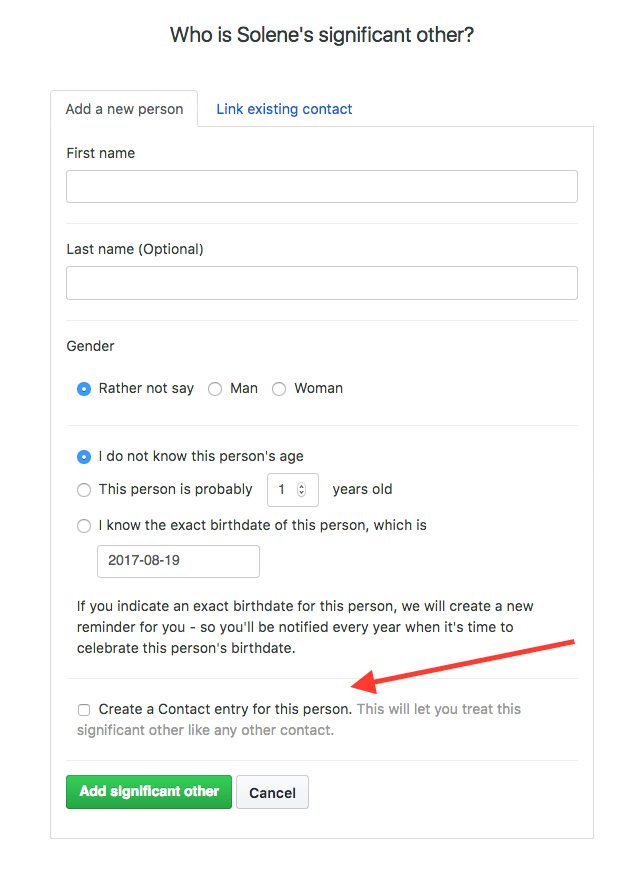 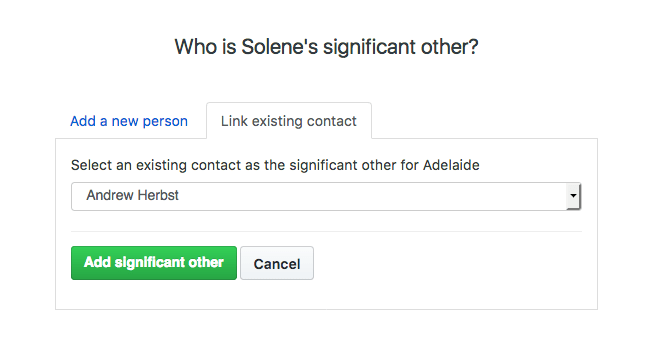 This change was the biggest change in the codebase so far, and the one that took the most time. For the ones who host Monica themselves, be careful when updating your instance - make sure you backup the database before upgrading.

Other important changes in this release

Version 0.6.3 is already in production, and as always, you can install it on a server that you own.

Monica 0.5.0 with version tracking and search

If you install Monica on a server that you own, chances are that you will want to be aware when a new version is available. With Monica 0.5.0, this is exactly what you get.

How does this work

In short, your Monica instance will send a daily ping to https://version.monicahq.com. The ping contains three information:

The last information is used to know the size of the instances of the people who download Monica. I need to know this information (and only this information) so I can move forward with better knowledge of how people use Monica. Also, there is no way to know who you are: the UUID is random, unique and anonymous.

The code of https://version.monicahq.com is open-source, stored on GitHub like everything we do.

In return of this call, you will get a JSON with:

This information will be used in the UI. In the footer, a new link will appear if a new version is available. If you click on this link, a popup will appear, with the release notes of the new version.

How to disable this feature

Every feature that changes how Monica fundamentaly works can be disabled, and this feature is no different. If you want to disable sending any information to https://version.monicahq.com, simply add the following to your .env file:

And that's it. No information will ever leave your server. The drawback is that you won't be able to be automatically alerted when a new release is available.

You can now search your contacts with a new search box in the header. The search will look at the following information in your contacts:

Searches should be pretty fast too. We are super excited about this feature. 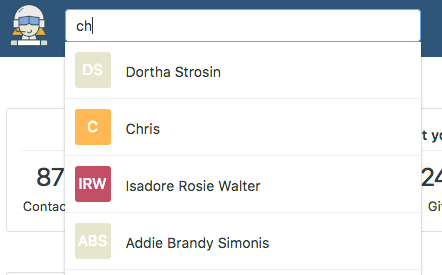 Version 0.5.0 is already in production, and as always, you can install it on a server that you own.

Keeping track of what you said to the people you care about is important. It was already possible to store notes about your contacts. Now you can also log a phone call, which will be super convenient to know when you last called someone and what you talked about during this call.

Version 0.4.0 is already in production, and as always, you can install it on a server that you own.

After launching Monica on Hacker News, I received a lot of questions about why I chose to write the tool with PHP and Laravel in particular. I was actually surprised to receive so many questions about this topic because I consider that a language does not matter - only counts what you do with it.

In this post I'll share why I chose PHP and Laravel and the difficulties I had to overcome to build the first version of the product. This post is not meant to start a war between languages.

PHP has an interesting history. A lot of great web developers, who probably do not use PHP anymore, have learned the basics of programing with it. It was so simple to use and get started with, and while it wasn't an elegant language, it paved the way for making a career in web development. Then over time, PHP became less loved, to the point where it was almost shameful to use PHP or even say in meetups that your company was using it. Other languages, arguably more elegant, gain a lot of popularity (Python, Ruby) thanks to wonderful frameworks built upon them. At the same time, new PHP frameworks appeared. Symfony for instance. But Symfony was still hard to learn and use. And then PHP died. Or so that's what people said, ignoring apparently the fact that a lot of business was still using it and loving it. Then PHP 5.5 was created, followed by PHP 7, and a new framework with a weird name appeared, Laravel. And things changed entirely in people's mindset. PHP is still not as elegant as other popular languages, but things got a lot better. It became also fast.

But regardless of this, PHP is still the language people love to hate, especially on Hacker News. They say PHP is not scalable. This is probably why Facebook and Mailchimp, amongst other big names, use PHP today, at great scale.

Why this context in mind - why did I chose PHP and Laravel?

What are the challenges I faced during the development of this project?

Overall I didn't have that many challenges while developing the current version of Monica. It's not a complex application, and I don't have scaling challenges as the user base is quite small still (around 7800 users total and 4300 active). But there are some implementation details that I did wrong - not because it was bad coding practice, but because my technical skills were not good enough to overcome those problems on the short term. Hopefully, listing those mistakes will help others not make them - or nice people will send me emails on how I could have fixed them.

These are some reasons why I chose Laravel. As I said at the beginning of this post, your project is not about the language. Unless your project is about learning a new language, you should not spend weeks choosing a language or framework. Stick with what you know, and just make something. Your users won't care that your code is ugly or that you chose Python over Ruby.

Only 5 days since v0.2.0 and yet another big release. So big that it required a new version for this.

When you have a lot of contacts in your account, you can now categorize your contacts with tag. Tags are like folders, but you can have multiple tags for one contact. This allows maximum flexibility to manage contacts the way you want it to do. 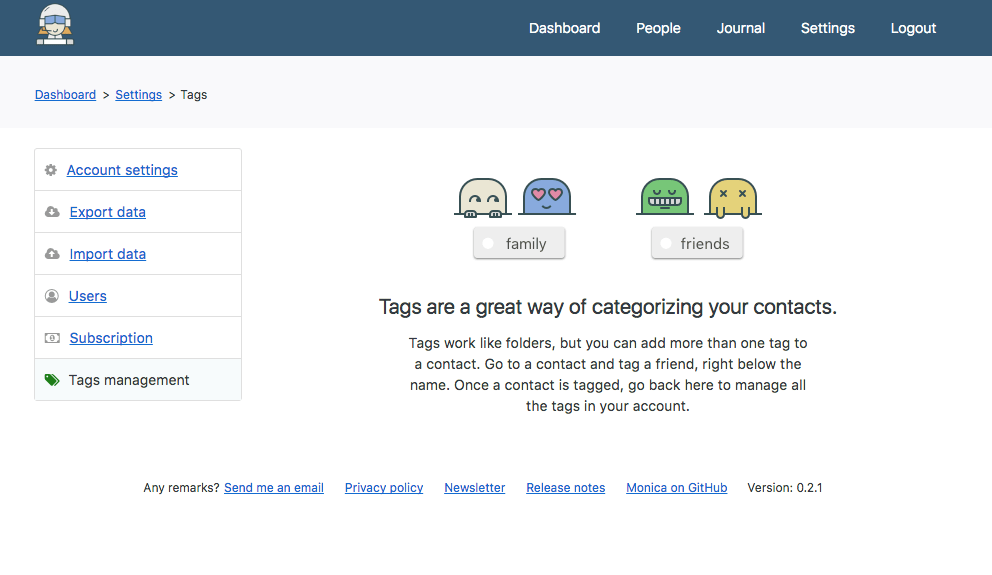 Tags can be entered right below the contact name. 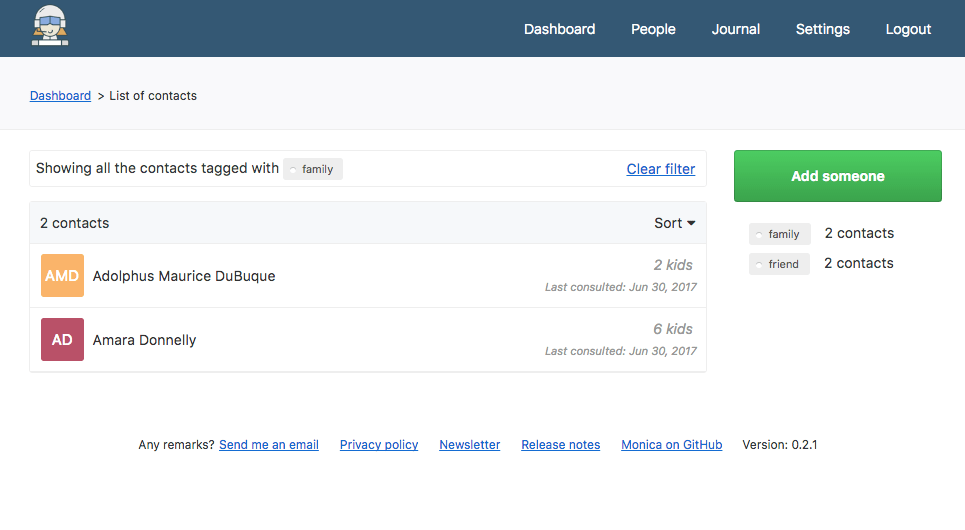 Finally, you can delete tags either on the contact view, or in a new Settings panel created for this purpose. 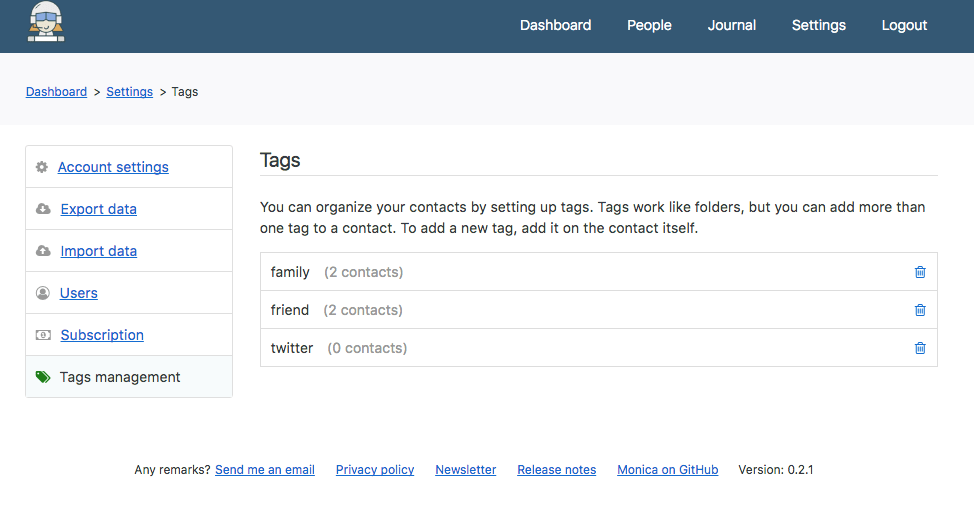 Version 0.3.0 is already in production, and as always, you can install it on a server that you own.

One of the biggest feature request is the ability to import contacts from Google. Google allows to export data about your contacts in the vCard format, which is the universal standard for exchanging contact information. Monica 0.2.0 adds the ability to import your data from a vCard file (either .vcard or .vcf), so you can populate your account with most of your data instead of having to add your friends one by one. 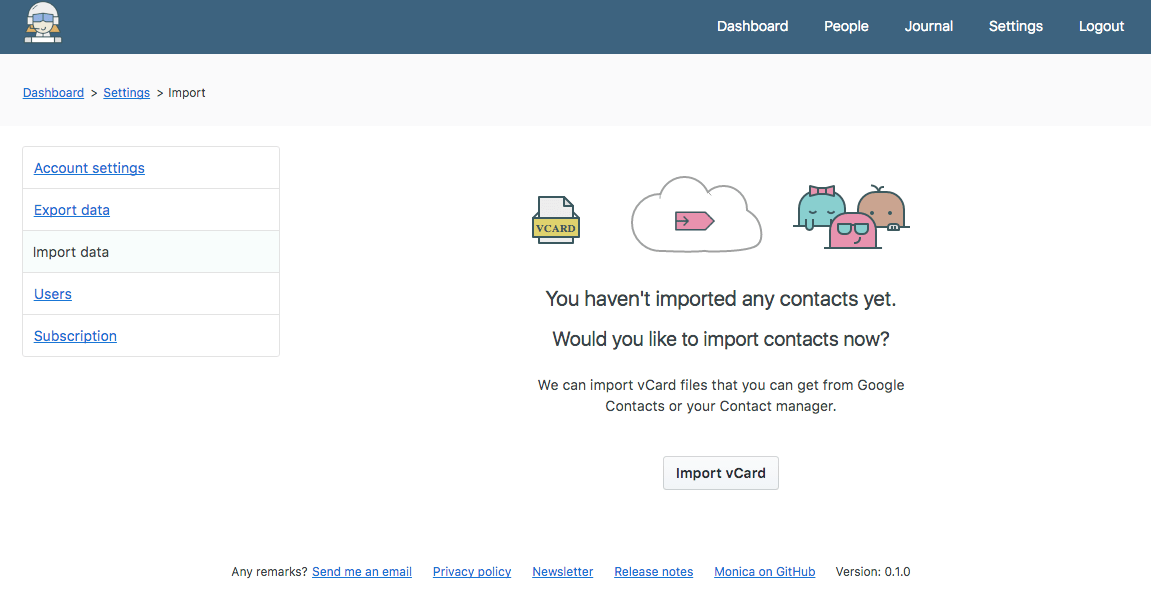 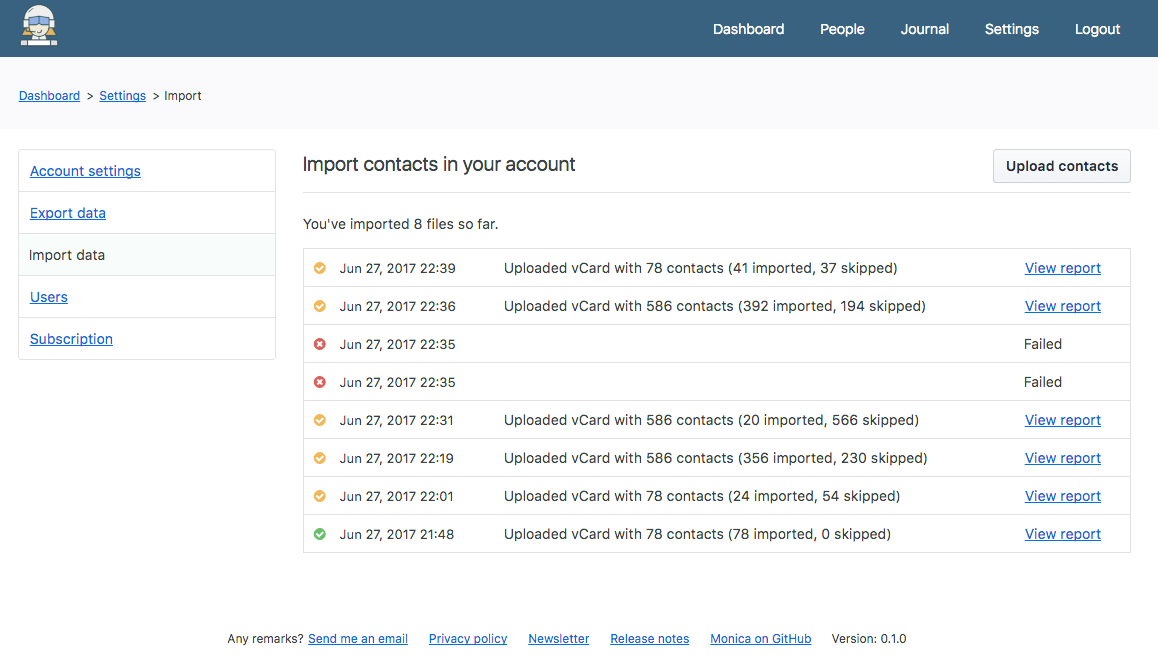 You can click on a specific import to see what happened. 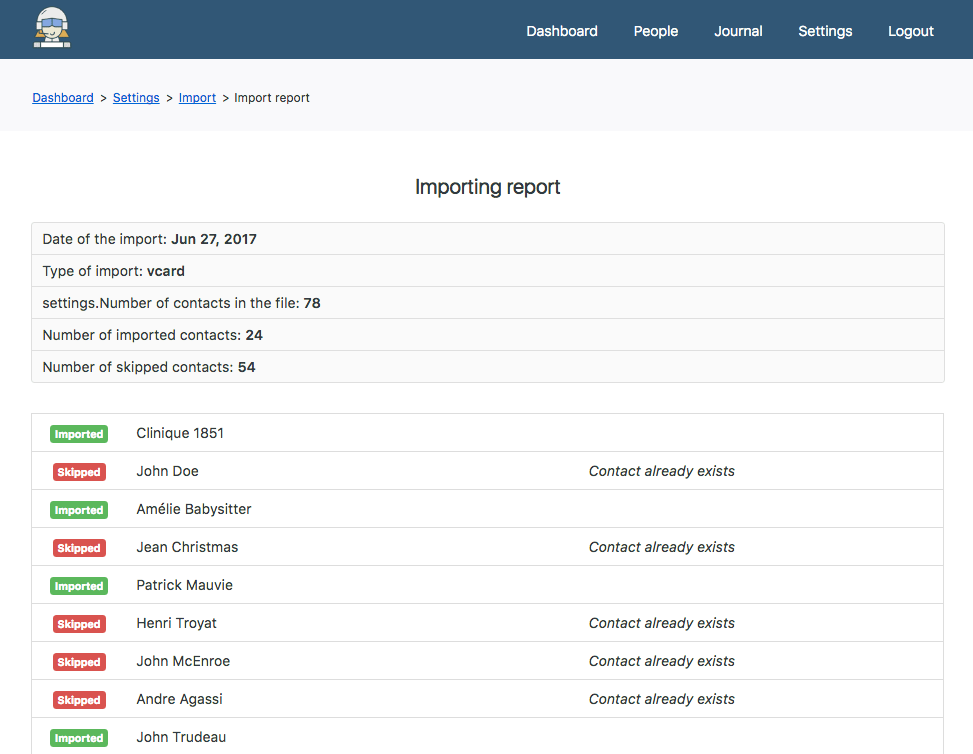 Also, we've added a feature to reset your account, which will be handy if you do import thousands of contacts and something goes wrong. Resetting an account deletes everything, except you.

Version 0.2.0 is already in production, and as always, you can install it on a server that you own.

Do you need to import your data?

The two most requested features on Monica so far are:

I totally understand why people want it. Monica is all about recording and documenting social interactions with the people you care about. Having to enter all the contact names one by one is considered by many to be a painful task. Moreover, having to record everything manually after a phone conversation for instance, is even more painful.

However, think about this. Monica is designed to help you have better relationships. Building relationships is not something that we should automate and make it easier. Building relationships is a conscious effort. It is not easy. It does require a bit of work. If you had the ability to import 500 contacts, what it would do to you? You would have now 500 people in Monica, ready to be documented. Will you really take the effort of entering all the information for those 500 persons? Can you even be friends with that many people?

I like the idea of having to enter my contact one by one, because it forces me to think of who is more important to me. For every person that I add to Monica, I conscientiously choose if this person somehow deserves (the word is definitely too strong but you get the idea) that I take the effort of documenting our relationship. Then for every person I add, I have to fill all those information for which I have to actively look for. I would go as far as saying that having a mass import, without the ability of pick and choose, would even ruin the main purpose of the application.

But this is how I personally see the product. How I see it, is perhaps not how you see it. Hence the need for an importer. We'll built it, definitely. But before importing your contacts, think about this. Do you need to keep information about that many people?

Monica is meant to host all the private information about your contacts. By nature, this is personal, and private. However, there are some cases where you would want to share these information to someone else - your spouse for instance. It's easy how Monica, in a context of a couple, can help the couple as a single entity to organize the relationships they have with their loved ones.

To address this use case, we are introducing the support for multiple users in a single account. 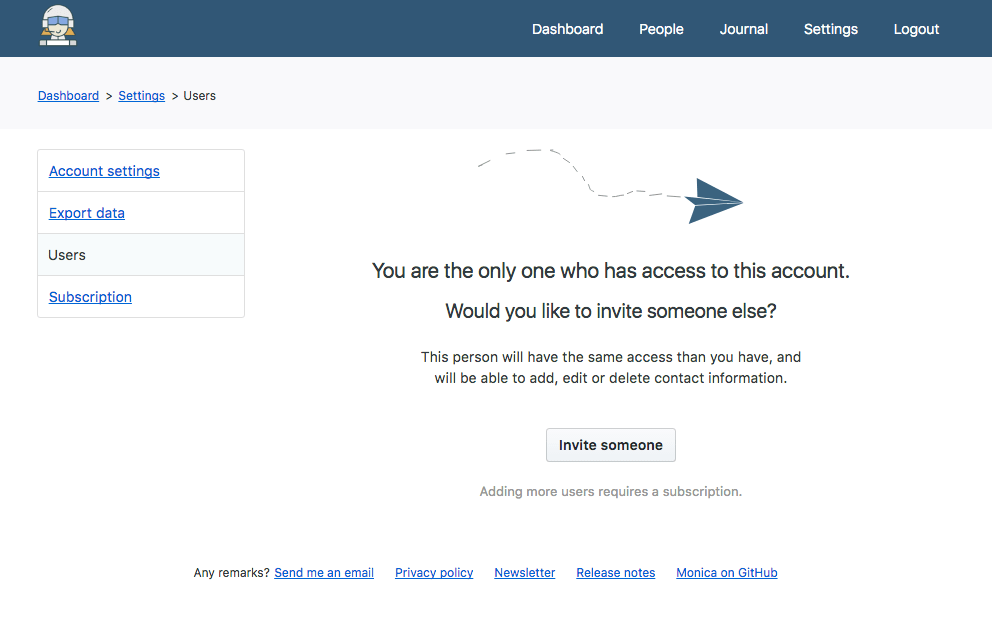 Adding users happens via email. As a security measure, the person you invite by email will have to enter the email of the user who has invited her upon registering.

This feature is the first paid feature. The paid plan is called Chandler and costs USD $10 per month. This plan is only available on https://monicahq.com and does not affect self hosted installations. If you host Monica on your own server, you have access to paid features for free.

Take a look at the pull request to know more about this.